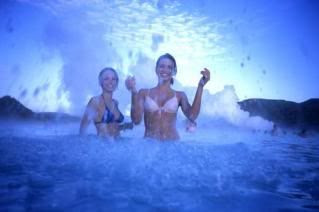 Clearly these two beauties haven't been told yet but McDonald's will close its business in the land of natural wonders: waterfalls, glaciers, lava fields, iceberg-laden lakes, windswept tundras and Geysir (the original hot-water spout after which all other geysers around the world are named): Iceland.

The omnipresent fast food giant apparently has no plans to return after it closes the three outlets in Iceland, franchises run by Lyst (owned by Jon Gardar Ogmundsson) and closed because "the country's financial crisis has made it too expensive to operate its franchise". Like many businesses, the restaurants had never been busier but "at the same time profits have never been lower" said Mr Ogmundsson, adding:

"It just makes no sense. For a kilo of onion, imported from Germany, I'm paying the equivalent of a bottle of good whisky"

Onions must be bloody expensive - we visted Iceland in July and I had a small beer at the hotel next to Geysir - 5euros!!

hi TGS, I bet it was alcohol free beer too! That was the only opcion when I frequented the wonderland, walking and hiking around, camping in the shadow of glaciers and crossing raging glacial streams (on foot, tied to a rope we rigged up)...and loving the scenery and the people...and only managing the first of the smaller pools of hot water around the swimming pool whilst the locals froliced in the "boiling" baths several 'levels' of heat resistence around from me...and baked beans a pound a tin, in the 80s!!!

Spoke to my cousin's wife last weekend, she has to go to Iceland four times a year on business, and she said it's got more expensive recently not less.

Watched a programme on Greenland last week and the snow is going and won't be back and the locals love it. They can grow vegetables again for their own consumption which is what they did hundreds of years ago before the current 'ice age.'

...ask her how much Heinz Baked Beans are now...it's how I measure the currency/inflation etc, bit like Big Mac elsewhere :-)