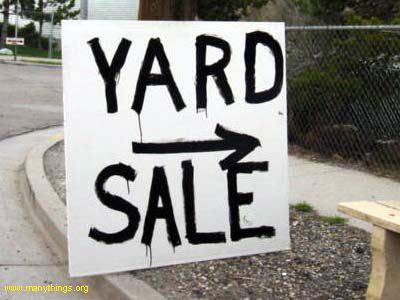 Turn left for yard sale; click on the image to go to the Number 10 website and read about and watch Gordon Brown speaking in the City this morning. The man inspires no confidence whatsoever. Elsewhere: "The expected announcement today of the privatisation of £16 Bn assets owned by the Government is reckless and irresponsible..." I'll say so! Although it is a miniscule amount when considering the debt mountain and as Charlie Elphicke, on Tory Diary at Conservative Home, goes on to mention

I agree but should the Conservatives be saying that the sale was "probably necessary"? Maybe but they should, as they have history, but also as they are the ones who are likely to be being stuck with this sell-off from 2010 but they should be sticking the boot in more and reminding the electorate just WHY this is "probably necessary" to do. That said it's a drop in the ocean when looking at the tsumani of borrowing that is forecast and the already high debt built up over Prudence's tenure. "Let's put that [16 billion] in perspective." writes Iain Dale,

The budget deficit in August was £16.1bn!

David Cameron said: "So, we've still got to get to grips with public spending, get to grips with the deficit - and we must make sure we get good value for money." Remember the gold sales and as Vince Cable has pointed out about this is that the government are "proposing to sell off in very depressed markets", no change there then. According to the BBC Margaret Eaton (chairman Local Government Association) said she "was amazed the announcement had been made without consulting her organisation." Hmmm, well actually all this has been announced before anyway, a usual New Labour - and especially Gordon Brown - ploy: the sale of the Tote was a 2001 Labour manifesto pledge, Labour failed to sell its shares in Urenco in 2007. The Dartford Crossing sale was announced earlier this year as was the sale of the Student Loan Book, David Lammy said in the House on the 12th March this year:

"The Government still intend to make sales from the student loan book, but it is clear that that should be done only when we can get a good return for the taxpayer. For the time being, the market conditions do not allow that, but we will actively look to identify opportunities for a sale that represents value for money as market conditions improve."

Thanks to Tim on the Conservative Home for these comments (22:02 in the second link)

This is outrageous I can't believe this country has sunk so low we have to sell off the Student Loans book!

Don't suppose you are seeing much Sky news where you are but I was amazed when I heard a Conservative backbencher say that he didn't think his party would win two consecutive terms. Throwing in the towel a bit early aren't they?

I'm just back in Spain this morning...catching up on a lot (it's a public holiday here today)

That backbencher needs a slpa although it does illustrate what a lot of people think and that the real labour ploy is to aim for 2014/15 election win, after all there is no other reason why they are so bloody useless and the blatant lies and general patheticness (??) seem to imply they want to make sure they lose the coming one!

I see Jaqui has just got a slap (a very light slap) on the wrist.

Last time I came bye this was a private site. Now its open I'll add you to the links when I do an update, and add you to my rss reader.

Thanks TGS...I think there was a spam period where I had it "locked". I will ad alink to your blog in my sidebar later tonight