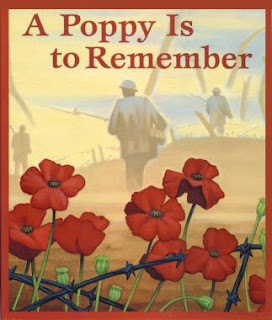 In Britain the first official Poppy Day was on 11th November in 1921, and the flower itself was inspired by the poem In Flanders' Fields written by John McCrae. The poppy wasn't chosen for it's historical symbolism of sleep and death although it is entirely appropriate [much of the bloodiest fighting of WWI and certainly among the worst battles in human history - trench warfare, chlorine gas - took place in the Flanders and Picardy regions of Belgium and Northern France: between 1915 and 1916 the Second Battle of Ypres and Third Battle of Ypres (Passchendaele), Battle of the Somme and Verdun. Names that still conjure up horror that most of us will never, thank God, know; the numbers of dead, wounded and MIA are staggering. Mind boggling.] no, basically, the poppy - a pretty, wild flower but also a hardly, common weed in Europe - was the only thing which grew in the aftermath of the complete devastation (click on image)

Whatever emotions I feel when I see photographs like that cannot be put into words that serve as any sort of memorial to those who died in action or returned home changed men.

I know Paul, I agree with every word you just wrote: we can never realise how it really was, we can imagine what we think it may have been like.