"They don't get overtime for that - they get a bonus to compensate."... 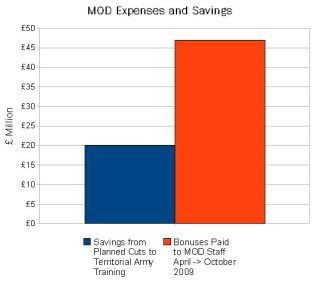 This may seem like a one-off but it's not: the MoD's own figures show a total of nearly £288 MILLION had been paid out in bonuses since 2003. All this is within budget and allowed under previously arranged pay deals...of COURSE it is! And all this seeking efficiencies and cutbacks? btw...The MoD employs 85,000 civil servants - one for every two active armed forces personnel - [BBC] not a problem in itself but how many of those are "really" necessary and are these bonuses performance related? Are they in lieu of lower salary?...I doubt it. Home Secretary Alan Johnson said that MoD civilians did "difficult and sometimes dangerous" jobs, going "into the front line" to develop techniques to protect troops from improvised bombs: where it is his "understanding is they work 17, 18 hours in Afghanistan... ...They don't get overtime for that - they get a bonus to compensate."

I have no doubt that SOME MoD civilians do indeed do this; well Mr. Home Secretary, find out if your understanding is correct; you should know! And how many of them do this and how much do they get? And what are their base salaries and what allowances do they get? I wouldn't mind betting the percentage that do what you say here is less than 2% of those recieving bonuses.

P.S. I know the Government has done it's U-turn i.e. "a total climbdown over the decision to cut the budget of the Territorial Army by £20 million" but this sort of problem won't go away and the TA has already had one budget cut this year of £23 million.

"not a problem in itself"

I actually disagree with that. This Government has created far too many Chiefs and not enough Indians. Why should it take the equivalent of two people to look after one member of the armed forces - it makes no sense.

I'm not saying it's OK, I'm just saying IF they're all useful and necessary it doesn't matter how many there are: I go on to say this probably isn't the case.

Of course it makes no sense. We know that all the ministries are bloated but just looking at a number in itself and saying "that's too high" or that's too low" isn't right.