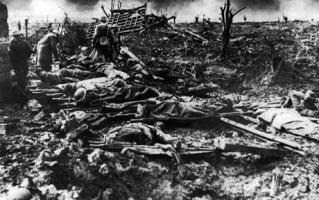 As is so often the case the bravest among us never see their own actions as brave or heroic. Captain Noel Chavasse is one of only three VCs and Bar in the 150+ year history of this highest award, those that have won two Victoria Crosses. After more than one episode of "conspicuous bravery" and dying of his own wounds he said "Duty called and duty must be obeyed." It's a wonderful story not very well known and in the news today after his VC and Bar was bought by Tory peer Lord Ashcroft for his VC collection (owned by a Trust); it is believed to have been purchased for a world record price of nearly £1.5 million.

Photo: TIME/GETTY IMAGES: Allied forces on the battlefield as they recapture the Passchendaele ridge. From the article in The Daily Telegrpah (click on image)

I've never come close to having to save somebody's life - hopefully (and selfishly) I hope I don't - except during the old days of giving blood. These stories are of real courage and can make you feel quite insignificant.

My Mum has saved somebody's life and got a medal from the old Queen Mum. She saved a child from drowning back in the 1950's. And no, it wasn't part of the swimming proficiency test!

I have, but in the sense or the situation of Chavasse or any number of others and it wasn't until I read this article in the DT that I'd even heard of him; yet he could have save the life of a relative or soemthing...funny old world.

Re you mum...was that pulling you out?

hahaha...funny thing though...I missed out the word 'NOT' in my first line i.e "but NOT in the sense or the situation of Chavasse" (a bit like you did the other day re the bank lending) and yesterday I also did exactly the same thing...everything perfect except the word NOT which gave totally opposite to what I was trying to say. D'oh...more care...the brain is faster than my two (yes, 2) typing fingers!