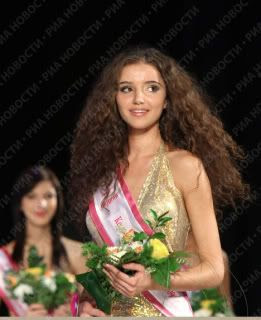 Sorry, just had to post this; a very pretty girl with the welcoming name:

Irina Getmanova, 19, a student who looks very much like one of my sisters-in-law, won the Miss Siberia 2009 beauty pageant held at the end of October. (click on image to enlarge)

The lovely Irina was only one when the Cold War officially ended but seeing her in such a competition is just one on the - albeit less serious - benefits of the end of that war; also, today is the 20th anniversary of the fall of one of the most infamous borders ever that came to symbolize the Cold War and the 'Iron Curtain' between Western Europe and the Eastern Bloc.

Well we all know that salt and cold are good at conserving things...and that's Siberia isn't it?

P.S. I wish I didn't agree with you, this inability to stop aging thing is depressing!