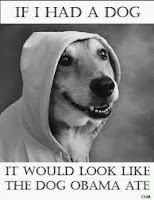 Dog wars escalate! No guessing what the story relates to: "In case you missed it, the [Democratic National Committee] has spent months harping on a decades-old story about Romney putting his dog carrier on the roof of a station wagon. No one in the media seemed to think this was silly or beneath notice. Then, earlier this week, we learned of an excerpt from Obama's award-winning memoir in which he describes eating dog during his time in Indonesia. Suddenly, the left became stunned and uncertain how to proceed." [Link]. There's many more great images, jokes and videos on this.

P.S. I'm pretty sure Barrack Obama never owned an Otterhound but it's the only dog breed that springs to mind that begins with an O!