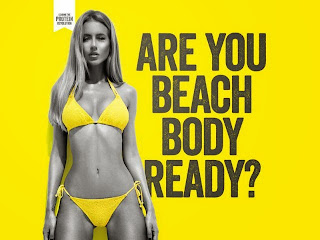 Protein World's ad has caused the usual uproar** and - as is often the case - "punters are actively purchasing the products the campaigners want banned, as a sort of protest against the protest" writes Martin Daubney at Brietbart; "So it is that, in an era when most life-threatening problems have been solved in the West, Social Justice Warriors construct and angrily confabulate new, First World Problems... ...It’s become something of a 24/7 Twitter soap opera, an X-Factor for the perpetually offended: a constant, noisy audition to a global network of like-minded Offendotrons..." [*borrowed that! Thanks].


"So, in affirmation of all the campaigners haven’t learned since the days of 1920 Prohibition and through punk rock: controversy and banning orders create demand and shift units."

"We've added 5000 new customers. Sales are booming" say Protein World (male bodies on show too). They're only trying to help: it's all about nutrition; they also have a Little Black Dress challenge (PDF). Excellent!

** Uproar for some, phwoar for others, me included; heelloooo Renee Somerfield.
Posted by Span Ows at 6:18 pm