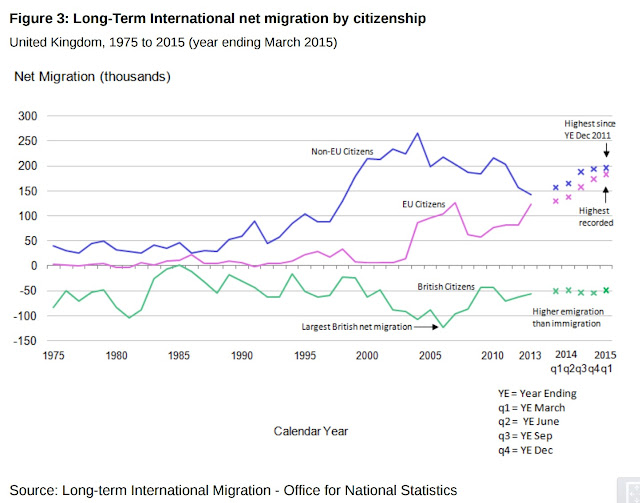 The net migration figure was a statistically significant increase from 236,000 in YE March 2014 and is the highest net migration on record."

Just two points from the summary from the Office for National Statistics (ONS) Migration Statistics (PDF full report); this is getting stupid. From Migration Watch press release: "There could hardly be a worse time for the Treasury to cut the funds available for immigration control." Looking at Fig 4 (in the ONS link) we see that from 2011 to 2013 there was a fair amount of success (down 25%) in lowering the non-EU immigration but half of this was counteracted by increased EU immigration. Since 2013 both sets have increased. Nearly 30% of the total net immigration (year to March 2015) were students, we'll give them benefit of the doubt although many thousands are not students at all and as we have seen in the past, some colleges and courses or tests were entirely false (and "Each year, around 100,000 non-EU students get their visas to stay in the UK extended"). A full 16% (year to March 2015) say the reason they came was "looking for work", WTF? If I turned up anywhere at a frontier and said I was just looking for work I would get turned back; I cannot think of any of the 50-60 countries that I have visited that would accept this. Are no questions asked? At all? A further 13% came as family/to join someone already here. Dare I suggest that of this 29% nearly* all shouldn't be here. * clearly some family of those on long term work contracts should be.

[Update] And when we look at the National Insurance numbers (NINos) and the probable number of illegal immigrants we can safely say the ONS figures are a massive UNDER estimate.
Posted by Span Ows at 8:24 am