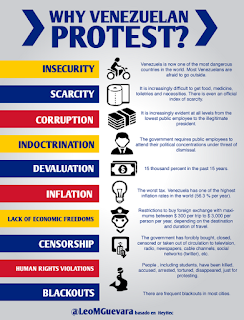 ...or, in Venezuela, it's an offence to be the Opposition, almost. The Organization of American States (OAS) has severely criticized Tibisay Lucena (the venal, corrupt and totally partisan [par for the course in most Venezuelan institutions] leader of Venezuela's National Electoral Council (CNE). [Reuters, also The Devil's Excrement] In a harshly-worded letter (ooooh) he wrote that Venezuelan authorities were failing to ensure fairness the coming 6th December fair elections.

The letter [here as PDF in English] [here PDF in Spanish] describes concerns regarding "the overall conditions of the process and the election campaign, an uneven playing field" putting it mildly in an "atmosphere characterized by serious political polarization and mistrust..."; use of funds for campaigns being abused with government candidates using national funds, the government deploying large numbers of civil servants and state resources for campaign purposes etc.

Reduced access to the [controlled] media. Contrived confusion on rigged ballots, with even new Krusty Nick Ripe speaking on national television assisting the cheat (he also 'promoted' an "ongoing campaign of threats and prosecution of workers, students, and popular sectors" along with the current president of the National Assembly Diosdado Cabello (Godgiven Hair), "who supports and promotes illegal activities of espionage and tracking of opponents." Changing the rules of the game: blatant gerrymandering, disqualification of opposition candidates ("There have been cases where they were prejudged, with no possibility of getting their defense [sic] admitted." Investigation of political parties etc...