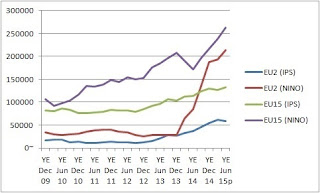 Jonathan Portes on the National Institute of Economic and Social Research website [NIESR]: "The government admits it has statistics on recent EU migration - and won't publish them". From Guido this morning: mainly because of EU referendum and possible Brexit migration data is being suppressed: "HMRC are refusing to release the data, giving this extraordinary excuse:


"… following the General Election, there is an active negotiation process at an international level in which UK Ministers and officials are engaged to secure support from the European Commission and other Member States for changes in EU law governing EU migrants’ access to benefits in the UK, in line with the Government’s manifesto commitments. The information is being used to inform the development of policy options as part of the negotiation process and therefore relates to the formulation of Government policy. HMRC continues to believe that releasing information in the form requested would, at this stage, be unhelpful to the negotiation process."

This is shocking on two levels..."

As mentioned back in August: "And when we look at the National Insurance numbers (NINos) and the probable number of illegal immigrants we can safely say the ONS figures are a massive UNDER estimate"; regarding the fact that there were over 200K NI numbers issued to Romanian and Bulgarian immigrants but only about 50K immigrants as having entered the country? [Breitbart]

Needless to say, this is just the minor part of the problem because non-EU immigration is probably the greater problem in both numbers and possible religious/ ethnic community problems in the near future.
Posted by Span Ows at 11:50 am