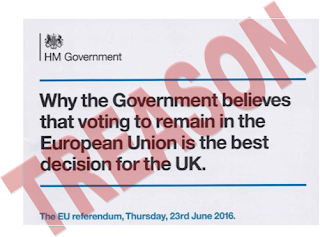 Is tricking Queen Elizabeth II into lying a case of Treason? Today in the Queen's Speech Her Majesty said


"My ministers will uphold the sovereignty of Parliament and the primacy of the House of Commons."

This is patently and obviously untrue.

The Treason Act 1351 - amended several times down the centuries - currently provides for four categories of treasonable offences, one of which is "if a man do levy war against our lord the King in his realm, or be adherent to the King's enemies in his realm, giving to them aid and comfort in the realm, or elsewhere".

All British nationals owe allegiance to the Queen in right of the United Kingdom; David Cameron and others - in their blind and damaging adherence to the alien and anti-democratic European Union are most definitely adherent to the Queen's enemies.

More details of previous treason by UK governments kowtowing to the EU at The British Gazette  HERE plus a handy letter already worded to send to the Police (beware, they may be complicit in this treason); but the LIE quoted above is beyond the pale. They may not hang given that New Labour's Crime and Disorder Act 1998 formally abolished the death penalty for treason and piracy but they should be imprisoned.
Posted by Span Ows at 9:21 pm