President Trump is housekeeping, he is trying to get the house in order; IMHO, so far he hasn't put a foot wrong. The most furor has come against his perfectly reasonable 'Border Security and Immigration Enforcement Improvements'. On this point especially, it seems many agree with The Donald: "All further migration from mainly Muslim countries should be stopped" [Chatham House, the Royal Institute of International Affairs]...Agree or disagree? Now this question is way WAY beyond anything President Trump has done but shows that the people of many European countries think along the same lines. Of course the polls have been very wrong lately so this could be rubbish; I somehow feel though that this one is spot on. 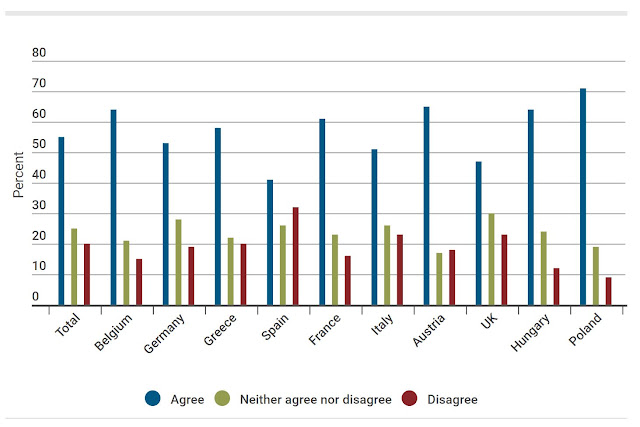 President Trump also "makes sense to a grocery store owner"; here is a great article and interview with 'oracle' Nassim Nicholas Taleb. "Well, I'm talking about the United States where I get more credible news from the social media than the mainstream media. [*] But I am very impressed with the Indian media that seems to present both sides of the story." Fancy that, a media organisation just giving the news in a non-partisan way? "The last crisis hasn’t ended yet because they just delayed it. Obama is an actor... ...he didn’t fix the economic system, he put Novocaine in the system."

The lefties are taking hysteria (modern definition) to whole new levels and we are probably not very far from seeing some of their heads explode as they get more shrill, more incomprehensible, more rabid, more violent (OK, "What's new?" you ask).

Interesting reading: "Trump’s often unorthodox style shouldn’t be confused with his otherwise practical and mostly centrist agenda" [National Review]. I love it, the title is "When Normalcy Is Revolution", it made me think of the foolish lefty oncethmus [**] and how they think they're the 'resistance'; they don't realise that President Trump IS the Resistance, the push back...at last.
Also, "No one should be surprised that postmodern America chose an antihero to be our next president" [The Federalist]. Both the above links from the ever excellent blog Samizdata.