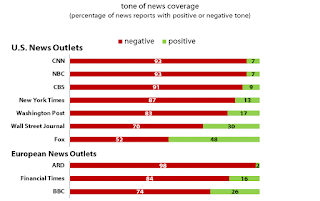 A really interesting analysis of press coverage from Harvard Kennedy School’s Shorenstein Center on Trump's first 100 days. The image left (click to enlarge) will not surprise anyone! If anything it highlights that things are probably worse than some thought. Compare that to coverage of Obama's first 100 days.

Many will say "Hey look, Fox is most pro Trump" but what that really tells you is that Fox is the most balanced; this concurs with my impressions back in 2008 when Fox were the ONLY outlet giving balanced coverage; the rest was just full-time fawning over Obama; it was so obvious and blatant it was quite sickening.

"Donald Trump’s ongoing feud with the media is not the first time a president has felt wronged by the press"; the difference is that he has "taken the fight to the press, openly and with relish." It may appear wrong, even vulgar but I've seen people saying Trump is at fault because some people may believe the media fake news! FFS! "On national television, Trump was the topic of 41 percent of all news stories—three times the usual amount." 41%!!! This is just crazy; the relentless tsunami of negative news (mostly contriving or downright lies from Democrats and their lackeys with dual objectives: stain, damage, topple Trump and cover their own law-breaking.) is bad for the country and by extension, the rest of the world.

Some sound advice: "Journalists need to resist even the smallest temptation to see themselves as opponents of government. It’s the competition between the party in power and the opposing party, and not between government and the press, that's at the core of the democratic process."  "The press should also start doing what it hasn’t done well for a long time—focus on policy effects.", i.e. not just rabid coverage of 'Washington' infighting; also:


"Journalists would also do well to spend less time in Washington and more time in places where policy intersects with people’s lives. If they had done so during the presidential campaign, they would not have missed the story that keyed Trump’s victory—the fading of the American Dream for millions of ordinary people. Nor do all such narratives have to be a tale of woe. America at the moment is a divided society in some respects, but it’s not a broken society and the divisions in Washington are deeper than those beyond the Beltway."

All quotes referenced within the article. if not from the article itself.
Posted by Span Ows at 9:04 am