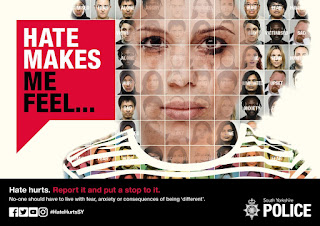 "Hate is hate. Online abusers must be dealt with harshly." Really? Hate is hate? No it isn't, in the same article it has their definition of hate crime, "recognised by the CPS and police, is 'any criminal offence which is perceived by the victim or any other person, to be motivated by a hostility or prejudice'". Worth repeating: 'perceived by the victim or any other person'; yes the same crap thought crime laws bought in by New Labour are being enforced and increased by the current powers that be.

So hate isn't hate: hate is what someone thinks is hate, and that someone may have very good reasons for saying they think it is hate. So looking at a BME (oh yes) the wrong way and saying something they don't like, anything, even if it's what you you say to friends and family, or leaving a bacon sandwich outside a Mosque, could be treated the same or worse as grooming, drugging, raping and gang raping [underage] girls... actually it already is worse because the former two are prosecuted immediately (in fact the second got a death sentence) whilst the latter is ignored for 20 years.

Both Alison Saunders's (CPS director of public prosecutions) piece in the Guardian (interesting choice given it's blinkered and shrinking readership and 'antisemitic' connections) and the Guardian follow-ups refer to the 'extremist hate seen in Charlottesville', you just know they do not mean the illegally gathering armed and dangerous Antifa (ha!) thugs. (Odd how the Governor etc who - as in Berkeley, California back in February - withdrew police and security)...so you just know what these new powers will do and it most definitely will not be equality before the law. Imagine if I were to say that anyone who follows the Koran - which calls for the death, enslavement or prejudiced treatment of ANYONE that doesn't follow the Koran - was evil, imagine that. Who do you think would be prosecuted if a case were brought to court? A Muslim? Any Muslim? A 'victim'? Or me for saying it? It is very easy to see where this is heading and the CPS - and increasing the Police - are complicit in the emasculation of the law, the destruction of a nation and the torture and slow death of a whole ethnicity.  "All CPS Areas have a Hate Crime Coordinator who undertakes performance management, community and stakeholder engagement and the implementation of legal policy and guidance within the Area." WTF? Jesus Wept.
Posted by Span Ows at 9:07 pm