Hah! The smoking gun, the proof they've promised...and promised...and...nope...Zzzzz. "Thirteen Russians have been charged with interfering in the US 2016 election, in a major development in the FBI investigation". Yea, major development. Take that Trump; take that Conservatives; take that Righties, take that Brexit lovers! Below are screenshots from the BBC Home page and their main News page and their page of news on this story...already the bubble was popped, hours ago...but they must keep on: Nelly the elephant [in the room] packed her trunk and said goodbye to the [media] circus - Trump Trump Trump - but the BBC, CNN et al are just so fucking biased and getting more ridiculous by the day. Jon Sopel and Anthony Zurcher are beyond pathetic. Two lines you will NOT see anywhere in the BBC report: 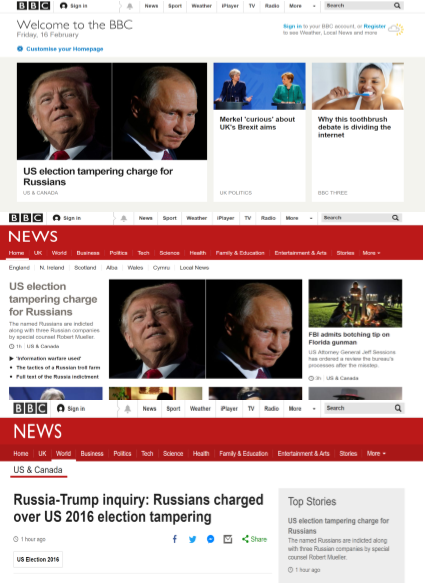 What the BBC DO report: "He also appeared to acknowledge Russian election meddling - something which he has in the past cast doubt on despite US intelligence agency assessments." They are so fucking biased that it must be intentional, editorial policy. So, you think there's anything on or against Trump? You think there's anything that hasn't gone on in every election in most countries for many decades, except for the modern technologies aspects obviously? [And certainly BY the USA in dozens of countries]. You think? Sorry, not so. This is nothing; this is ONLY about using social media to influence people.This isn't a nothing burger, it's not even the screwed-up paper wrapper of a nothing burger.

The next Trump bashing is already in the pipeline, although I'm sure it'll be the Bishops being bashed if you know, what I mean [adult content].
Posted by Span Ows at 12:20 am