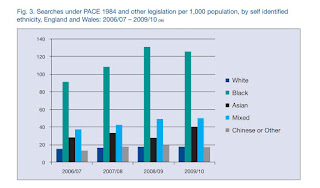 Reading Alasdair Palmer's article "The stop and search race myth" in The Spectator earlier this week a number of points came as no surprise (Theresa May, the then Home Secretary, wanted to look good with black voters, special advisers editing out important info, SJWs critical of the police’s racist use of stop and search, the stats showing many times more likely to be stopped and searched if you were a member of an ethnic minority etc.) but at least one point was a surprise (although obvious when considering the title of the article!): it has actually been shown that it really is a myth. Palmer names - but doesn't link to - THIS report, by P.A.J. Waddington and others: 'In Proportion: Race, and Police Stop and Search'...but this doesn't stop politicians pedalling lies.

It has long been obvious to everyone - EVERYONE - except lefty liberal dimwits, lying politicians, IYIs, guilty or blinkered BAME etc., that stop and search is always going to be bias against the profile of those committing the crime. Why stop ginger grannies when 'a big black dude' was the assailant? That said, on those grounds alone, all the innocent big black dudes would get pissed off if they kept getting stopped and searched. Looking at the image to the above, you'd think, hey, that's racist: indeed, in some years it was 6 or 7 times more likely to get stopped if you were black. That image is Fig 3 on page 8 of THIS Police Federation report from 2012; nearly a decade old data but things haven't changed that much overall. HOWEVER, this supposed race bias is countered and proven false when one considers (a) WHEN the searches are done and (b) WHERE the searches are done e.g. from Palmer:


"[The team of Home Office researchers]... discovered that when you looked at who was available to be stopped and searched when the police were actually stopping and searching on the streets, the ethnic bias disappeared. In fact, the police stopped slightly more white people than they should have done if you looked solely at their proportion of the street population."

Oops. Somewhat supporting this IMHO is a more recent report from 2015: 'Stop and Search: Exploring Disproportionality' where in Leicestershire the perceived (by the police officers) ethnicity was of those stopped was 68% White European, 19% Asian, 10% African Caribbean etc., (Self‐reported ethnicity had high agreement with officer perceived ethnicity). i.e. represents what's there in front of them, not police racial bias.

This is reminiscent of Overt omissions, obvious outrage: the lies surrounding the stats re police killing blacks in the USA where the numbers are skewed: "These disparities mean that virtually every time the police in New York are called out on a gun run—meaning that someone has just been shot—they are being summoned to minority neighborhoods looking for minority suspects."
Posted by Span Ows at 1:04 pm