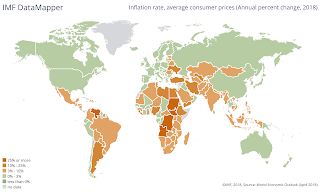 Looking at the IMF inflation figures and the CPI (the Consumer Price Index measures changes in the price level of  "a typical basket of consumer goods and services" etc purchased by households; the rate of inflation is the rate of change of the average CPI) and the map (left) indicating those levels. Venezuela and a handful of central African nations are "25% or more"; OK doesn't sound too bad does it?  However, there's a few more zeros on Venezuela's, HERE. Gross domestic product per capita is falling like a stone and even HALVED between last year and this.

A good overview of the whole Venezuelan crisis is HERE, although only updated to March this year so nothing about the recent sham elections. "The humanitarian crisis has spilled across Venezuela’s borders, with as many as five hundred thousand fleeing in the past two years. Many have crossed into neighboring Colombia and Brazil, while others have left by boat to the nearby island of Curacao." I can tell you many thousands are also in Chile, Peru, Ecuador, Panama, Costa Rica, Dominican Republic, El Salvador Mexico etc. Several holes in heads needed smartish.

There's also THIS , 'How Chavez and Maduro have impoverished Venezuela', "And it is always the people that suffer most."

The real shame here is not the that it can't be changed but that it will take at least a generation to get over this period. Take out the trash tomorrow and change the whole governing structure including all the higher ranks of all the forces and it would take 50 years to heal the wounds of 'el pueblo': it is deep, the splits and resentments and hate between members of the same families; the scummy thieving armed shits that ruin everyone's' lives; the Cuban poison orchestrating from the shadows, the sin cojones policia, guardia and armed forces that years ago should and could have stopped the rot.