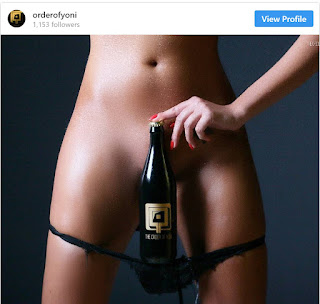 A beer for pussies? No, a beer from pussies: the first beer with specific lactic acid bacteria from a selected vagina. Polish brewer* Order of Yoni have produced a beer containing the 'quintessence of femininity.'

Zero Hedge has the details: "Polish 'Vagina Beer' Contains 'Essence' Of Two Smoking Hot Models". "The secret of the beer lies in her vagina". No really, that’s what the Order of Yoni have on their website. And those worried about health issues fear not: the beauties in question "had undergone gynecological [sic] examinations, and then the material was double-checked in the Poznan lab to make sure that the lactic acid bacteria were isolated from the smear." Right, now I’m losing my appetite a bit...

In the Order of Yoni's FAQ they reveal in fact that they don’t brew in their own brewery but that they are ‘a craft brewery’ “that commissions brewing to our befriended, partner breweries”. Not sure whether it’s a joke or not, but they go on to say they are looking for supermodels, actresses, celebrities etc., for a future launch of a special series of beers with, for example, edible gold and saffron. Their strap-line “Bottled Instinct” sounds like a poor translation to me; will it have a yeasty aftertaste?
Posted by Span Ows at 12:10 am