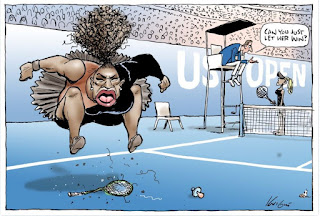 Interesting that the howling outrage mob are at it again. I am talking of course about those that claim racism etc., re Mark Knight's cartoon in The Herald Sun (report in News.com.au)  He says his portrayal was "never about race or gender — rather the sporting superstar’s bad behaviour", something obvious to normal people but not obvious to racists. Knight says he suspended his Twitter account overnight because of abuse towards his family... par for the course for the violent, nasty Left.

Reminded me of the outrage a few years ago in the New York Post, (report in Guardian) re the racism row over a chimpanzee cartoon; people equated the chimp with Obama...so who's the racist? You see a monkey and think it must be a cartoon of a black person? In that Owsblog post there is a cartoon of President Bush as a chimp...no outrage; they are outraged when it is Obama, or Williams...they see a black person and think chimp, or vice versa. They are racist.

Same for the Ross Barkley 'gorilla' "racism" last year [BBC] when Sun columnist Kelvin MacKenzie compared Barkley to a "gorilla at the zoo". Liverpool Mayor Joe Anderson told BBC Sport he reported the article to the police for a "racial slur" because Barkley's grandfather was born in Nigeria...who's the racist? Not MacKenzie but Liverpool mayor Anderson who relates a Nigerian to a gorilla!
Posted by Span Ows at 2:31 pm