The UK government has lost the plot completely. The Olly and May horror show continues: every single EU stipulation conceded, every UK red-line ignored...total surrender. Luckily, certainly with regard to the media hoo-hah over Gibraltar, the Chief Minister of Gibraltar, the Hon. Fabian Picardo QC reacted well; Mrs. may should read, understand and iterate his final paragraph: 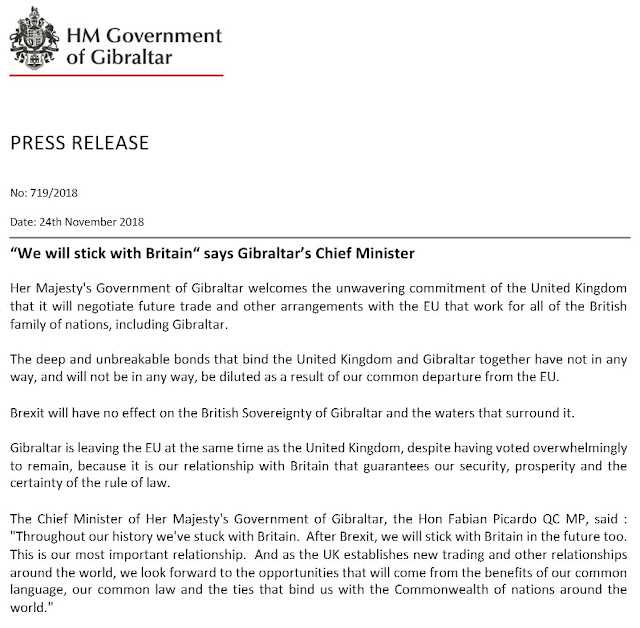 In a later press release, [PDF] also yesterday, Fabian Picardo gave a full statement after having talked with Treason May. He sounded reassured: "Theresa May made repeatedly clear despite clause 24 that she would negotiate to include us in the Withdrawal Agreement", but I would suggest he doesn't count his chickens: the 'Strong and stable' and 'No deal is better than a bad deal' mantras, amongst other, etc., spring to mind. Ian Duncan Smith on Sky News this morning [Guido] suggests slippery May has conceded over Gibraltar's future trading arrangements to Spain

In the same press release Picardo compared the crowing of Spanish PM Pedro Sanchez over the sovereignty of Gibraltar to 'pursuing the policy bidding of the Generalisimo [Franco] himself'. LOL.
Posted by Span Ows at 10:29 am