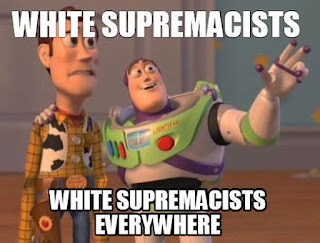 White supremacists everywhere...it's the new buzzphrase in the USA, a clear and blatant - coordinated - effort by the Democrats, the fake-news-MSM and the carzy Left (can you tell the difference these days?) to demonise The Donald. Beto O'Rouke is on a misson, not sure what yet but obviously he is intentionally making headlines by spouting shit; it's anti-Trump shit so gets a lot of support [Guardian...source MSNBC]. I am guessing it's a last ditch effort to get near double figures in the 2020 POTUS Dem candidacy. Only this week: "I mean the president has not been shy. He’s not been saying this behind closed doors. This is out in the open. All people of one religion, inherently defective … should be banned from the shores of this country,” O’Rourke said on MSNBC. Did you note the strawmen raised there? "All"... "defective". He went on: “The only modern Western democracy… that said anything close to this is the Third Reich, Nazi Germany.”

Comparisons to Hitler are nothing new and even against Trump are nothing new (from 2016) but the lefty pricks in the USA - and especially it seems the failing MSM (CNN, MSNBC...looking at you) - seem to be attracting more dangerous ranters - encouraging them and certainly not admonishing them - than could be called a coincidence; now they have gone full retard: on NBC: "Bizarre - Former FBI Official: Trump Ordered Flags Flown At Half-Staff To Honor Hitler" [LINK]...because it is the 8th of the 8th (HH) and you'd think he'd be cut-off or questioned but already on twitter there are many saying how sinsiter that is...and they're serious! Back in July, Democrat Steve Cohen: "It was more reminiscent of Germany during the beginnings of the Hitler regime." This week, nutter Democrat Jerrold Nadler said "reminds me of the 1930s in Germany."...after setting up several strawmen in one sentence: "What's the connection between background checks and immigration reform?"  on Morning Joe [who else, LOL] "That we have to keep guns out of the hands out of the invading hordes of less-than human people coming across our border? That's the implication." Invading hordes? less than human?

I mean, even more bizarre: MSNBC again: WTF? "MSNBC’s Nicolle Wallace falsely claims that Trump is “talking about exterminating Latinos” or Russian Impeachment Mika (neds a new tune: "the President of the United States of WANTING mass murders to happen." Funnily enough, that cahrge could be more logically applied to MSNBC reporters and staff and many others with trump Derangement Syndrome.

Even usually sensible sources are doing it: "The Rise of the American Gestapo: Has It Already Happened Here?" "Despite the finger-pointing and outcries of dismay from those who are watching the government discard the rule of law at every turn, the question is not whether Donald Trump is the new Adolf Hitler but whether the American Police State is the new Third Reich." [LINK]

FFS. O'Rouke et al are CAUSING the violence, not Trump! MSNBC, CNN and thier truly ignorant talking heads are aiding and abetting the rise in violence, not Trump! The social media hordes spouting evil and threatening violence are mainly from 'the Left'. Antifa and other assorted violent twats are almost entirely of the Left. They always are... and where does it normally end?  ...Well, dare I say it?

Added 08/08: (oh no, Hitler Day!): Elizabeth Warren is another: "Senator Elizabeth Warren, a leading Democratic presidential candidate, said in an interview that she believed Donald Trump was a white supremacist." Clueless.

Added 09/08: Also like-minded: "And the mandarins of The New York Times were just getting started with the terrorism hysteria." [LINK]


"The Times was hardly alone, of course. In the wake of the El Paso and Dayton shootings, the corporate media went into overdrive, pumping out “white supremacist terrorism” mass hysteria around the clock. The Guardian took a break from smearing Jeremy Corbyn as an anti-Semite to proclaim that El Paso was “Trump-inspired Terrorism.” The Sydney Morning Herald declared that the U.S. is now officially in the throes of a “white nationalist terrorism crisis.“ The Atlantic likened Trump to Anwar al-Awlaki, and assured us that “the worst is yet to come!“. Liberal journalists and politicians rushed onto Twitter to inform their followers that a global conspiracy of white supremacist terrorists “emboldened” or “inspired” by Donald Trump (who, remember, is a Russian secret agent) is threatening the very fabric of democracy, so it’s time to take some extraordinary measures!"