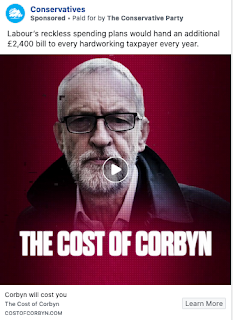 Back to the General Election...and why not: Christopher Snowdon commented on Twitter the day before the 2019 General Election that he hoped somebody would look into the 'false looking' ("garbage") statement that "Investigation finds '88% of Tory ads misleading compared to 0% for Labour'".

On the face of it I think most normal people would immediate realise something wasn't right: much of Labour and many of their blinkered followers - usually the most vociferous - seem to spout lies almost eveytime any of them speak (IMHO!) so why would their ads be any different. This week Christopher updated (answered his own Tweet) that "No one ever came back to this factoid so I did it myself." And what a good job he has done too (plus bonus points for correct use of 'factoid' i.e. some 'fact' that is false!): on his blog Velvet Glove, Iron Fist he lays out a full and fair account showing that the "investigation" is obviously wrong, their interpretations flawed and their methodology quite ridiculous. I say 'fair' as he highlights possibly misleading statements from both parties plus (amazingly) both The Guardian and the BBC come out untainted - unlike many lefty luvvies, comedians, commentators and even Labour MPs. And I say 'full' as the blog-post has dozens of examples and doesn't really favour either side, except by the upshot of the whole thing in that the 88% to zero was very clearly fake news designed to help Labour...that went well.


"The idea that 88% of the Conservative adverts were 'lies' is itself a lie, seemingly designed to affect the result of the election as the campaign neared its end. It appears to have been designed to help Labour win and has subsequently been used as an excuse for why it lost."