Update 8th Jan: from Guido, Corbyn keeping up his record of always siding with anyone who could be construed as an enemy of the U.K.: "Corbyn has now unveiled his latest shocking foreign policy opinion in refusing to call Soleimani a terrorist – a man responsible for the deaths of thousands of Middle Easterners and Western forces; and something even Democrats like Elizabeth Warren have agreed with wholeheartedly. Is it any wonder Boris has refused to personally brief Jezza on Privy council terms? Every day we must be thankful he never got into power". Amen

Bit late on this, wasn't going to post that I agreed with The Donald (I do) plus I have only just seen the cartoon below (SM Radio @SMohyeddin "The killing of #QassemSoleimani by Iranian artist @ManaNeyestani"). Apologies for all the Twitter links and also if you think my title is crass but some of the lefty-love-in reaction has been far more crass. Some interesting points about the 'real Soleimani' on THIS THREAD by Karim Sadjadpour whose first point may seem exaggerated: "1. There were many tributes to by Iranians who viewed him as a widely-beloved Persian Che Guevara, w/ little self-awareness for his role in the repression, displacement, and death of millions." and HERE from Masih Alinejad: "Some Iranians compared the funeral services for Soleimani to those held for the Nazi leader Reinhard Heydrich..." 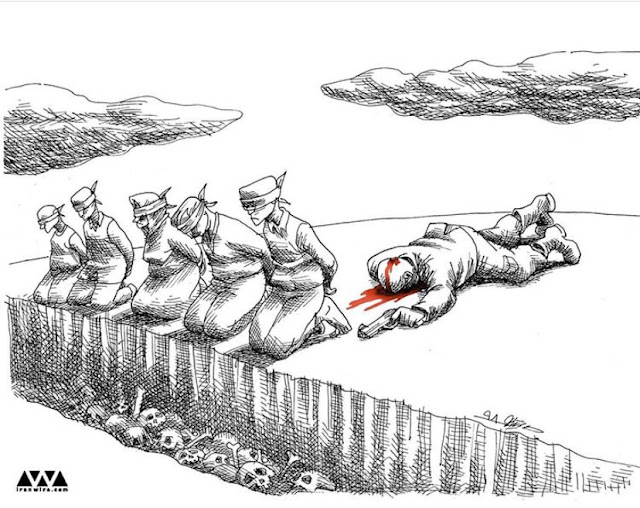