A follow-up to the post last week. As before, graphs from InProportion2. And as I said before, still not breaking any records, considering that since the turn of the century we have 5 million more people in the country.

"For most of 2020 so far, the overall number of people dying has been less than it was in 2018 (a bad year for flu/respiratory disease). The chart below shows that the number of deaths in 2020 has now started to exceed those in 2018 for the same time period - so far by about four per cent. Much of the media provides a continual stream of sensational headlines about Covid such as "Death tolls soar as ..." or "Worst week since records began for..." but it must be asked if such fear generating approach is justified or helpful."...

Well, we know the fucking answer to that, don't we? A big fat NO! 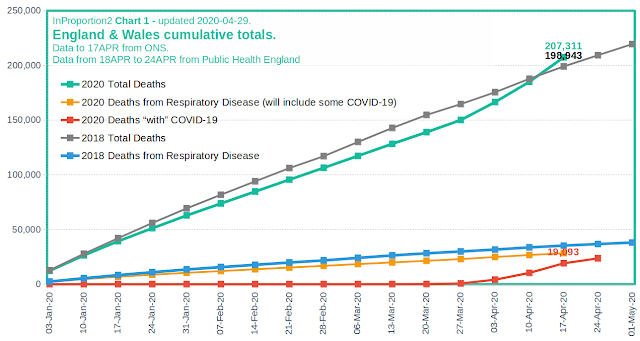 Note: Updated 2020-04-28 using the latest data released by the Office for National Statistics and Public Health England, complete to 2020-04-17. Numbers will be lower than those given in daily government press releases as all figures here exclude Scotland and Northern Ireland. They also exclude estimated deaths between 2020-04-17 and the most recently announced. Numbers after 2020-04-17 are from Public Health England
Posted by Span Ows at 10:42 am