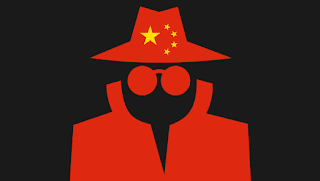 This from the USA but one presumes we have the same problem in the UK and Europe:


"Professors around America have been caught selling secret research to the Chinese Communist Regime. The national media won't cover it..."

And there are more than a few! See Cabot Phillip's Twitter feed for details or easier to read in Thread Reader HERE.

In the UK our vile media is turning into the what the USA is having to put up with, think BBC = CNN and you won't be far wrong except in the UK the public are FORCED to pay for the biased BBC. Here we currently have the Remainer-run Dominic Cummings witchhunt where the bubble and blob are really freaking out: over there, Cabot writes

He adds that "People on campus are afraid to question China's influence efforts for fear of being labeled xenophobic or racist." Sure, but they will also be concerned they'll lose their funding: think of similar to the Arabian Islamic paid influence in many UK and European Universties, but x 10.
Posted by Span Ows at 1:34 pm