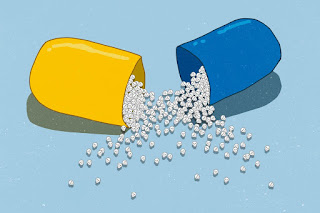 Anyhoo... I am currently reading an enjoyable fiction novel that has the plot of opiate addiction. The author mentions that this is nothing new and is really a repeat of what happened in the period up to WWI. Although I knew a bit about it - re laudanum luvvies - it chimed exactly with an article I was reading in the NYT (yes, yes, I know): "The late-19th-century opiate epidemic was nearly identical to the one now spreading across the United States", from Clinton Lawson's "America’s 150-Year Opioid Epidemic"..."In the case of the opioid epidemic, history is literally repeating itself.". the article very maturely points out that the main problem is to find a way to take the appropriate steps to both 'confront the powerful interests that drive' the over-prescribing of opiate painkillers and avoid over-criminalising the 'victims': most addicts aren't needle using zombie-looking dropouts in a dirty 'trainspotting toilet' backdrop. And some of these [CBS] "prescription painkillers are about 50 times more potent than heroin and up to 100 times more potent than morphine."

The Council on Foreign Relations has a great background on the issue and although the US Opiate Epidemic is clearly the worst, they are certainly not alone (scroll down to "How are other countries dealing with opioid addiction" HERE). In the UK too, opioid abuse is growing. "Britain already has Europe’s highest proportion of heroin addicts, and last year, drug-related deaths hit a record high in England and Wales" and as previously mentioned, it isn't always the "classic". The image above is from the same article, look closely: click to enlarge.

More info: NIH/NIDA, where it also tells the sorry tale that from July 2016 through September 2017 opioid overdoses increased 30 percent in 45 states; in the Midwest region where a large number of my family (not immediate) live, the increase was 70 percent.
Posted by Span Ows at 7:39 pm