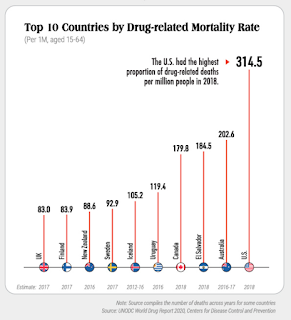 Iman Ghosh's article on opioids last week at The Visual Capitalist shows "The Spiraling Opioid Epidemic in America" certainly isn't getting any better. The graphic and info are actually terrifying. "As per the medical and legal standard, opioids are often compared to morphine. To that end, heroin is 2-5x stronger—while fentanyl is 50-100x more potent."  And worse is here/on the way:


"Another drug rearing its head on the streets is carfentanil. Formerly developed as ‘elephant tranquilizer’, this synthetic opioid is similar in appearance to other illicit drugs such as heroin, making it indistinguishable when mixed in. However, there’s one big problem—carfentanil is 100x more potent than fentanyl itself."

The data is from the UN World Drug Report 2020 [Executive Summary] and the image left (click to enlarge) - showing a few surprises in the Top Ten countries for drug related death - is clipped from Iman's post.